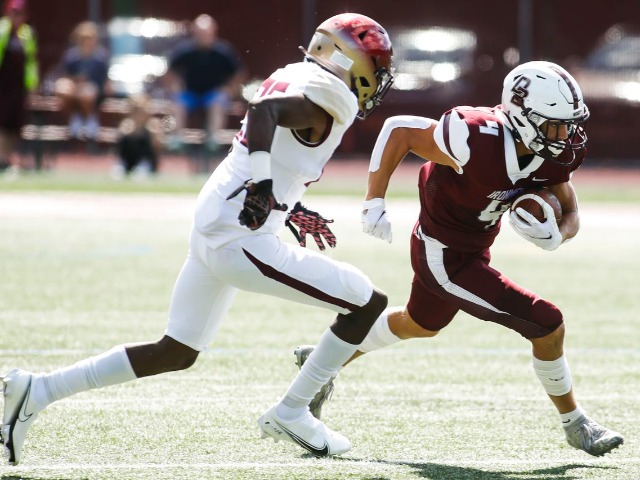 After an exciting season, the following players have been selected to the 2021 All-North Jersey football teams.

Angeli finished his career as an undefeated state champion, guiding the Crusaders to a 12-0 season and the Non-Public A title while throwing for 1,717 yards and 15 TDs and rushing for 218 and four scores. He has committed to Notre Dame.

Arjona capped an incredible career in which he was a three-year starter and led the Highlanders to two sectional titles. (They had one other title before he came). He amassed more than 3,000 yards of total offense in 2021, throwing for 2,403 and 30 touchdowns, and he has committed to Monmouth.

When healthy, there may not be a better offensive lineman product from North Jersey in the last decade. As the season went on, the 6-foot-5, 290-pound Bisontis became a two-way force for the Ironmen.

The lightning-quick Branca registered more than 2,000 all-purpose yards for the 12-1 Highlanders this season. He rushed 280 times for 1,518 yards and scored 17 touchdowns, added 234 yards receiving and averaged 28 yards per kick return.

Brogna, a two-sport standout, was a two-way star up front for the Crusaders, anchoring the offensive line and ranking fourth on the team in total tackles (47). He added four sacks on defense.

Butler was the engine that drove the Crusaders offense. He finished with more than 3,000 rushing yards in his career (remember, the 2020 season was shortened), good for second all-time in school history. This year featured 1,193 yards and 23 TDs, and he is committed to Princeton.

Bonus Magazines
Learn about launching the world’s most powerful telescope in NASA or the groups helping soldiers ease into civilian life in Veterans Affairs.

Carbanaro led North Jersey in kicking points with 67. He connected on 58-of-59 extra points and made all three of his field-goal attempts.

The epitome of a gritty North Jersey football player, Cerulli is small but tough. He scored 27 touchdowns in a variety of ways for the NJIC champions, rushing for 1,360 yards and making 31 catches for 403.

Clark gave the Panthers a presence on both sides of the ball and is the school’s first Division I commitment in years. He has committed to Brown.

Ramapo quarterbacks just keep getting better and better, it seems. In his first year as a starter, Grusser showed amazing accuracy and speed, throwing for 2,645 yards and 32 touchdowns while adding 764 yards and 12 TDs rushing. He’s also a track standout.

Heath emerged as one of North Jersey’s premier backs, rushing for 1,295 yards and scoring 15 touchdowns as the Ironmen (8-5) reached the Non-Public A title game.

The senior gave the Panthers balance on offense with their renown running game, catching 59 passes – fourth-best in North Jersey – for 865 yards and 11 TDs.

The Highlanders' Ironman never came off the field. Pound for pound, he may have been the best player in North Jersey, logging 25 tackles for losses (9½ sacks). After a loss in the North Group 4 final, it was telling that the first player Rutgers coach Greg Schiano spoke with after the game was Johnson.

What broken wrist? Manning was a dominant force for the Owls, even playing the late part of the season with an injury. He finished with 25 touchdowns and 1,530 yards for the sectional champs.

The other mauler on the Ironmen offensive line, Moreno was a key part of the Don Bosco running attack. The 6-foot-3, 285-pounder also played some defense and had six tackles in the Non-Public A final.

Ramadan was the heart of a great line for Clifton, playing both ways and on special teams (he even blocked a punt). He brought great size and tireless effort for the North 2, Group 5 champs.

Robinson was the Green Raiders' top passing target, leading the team in receptions (69) and yards (976). He caught 12 touchdowns, including four in a state-playoff win over Ridge.

The son of a beloved Comets icon, Whiting was one of North Jersey’s most-feared backs. He finished with 1,609 rushing yards and 16 TDs, setting a school record with seven touchdowns in the Comets' win over Passaic.

Bellamy showed off his elite ball skills, tying for the team lead with four interceptions. He also finished with 27 tackles. He has committed to Notre Dame.

The Highlanders' defense may have been overlooked at times, but it was one of the best in North Jersey. Chostaka was the area leader in tackles with 162.

How many times do you see a player on the North Jersey leaderboard for both tackles and rushing yards? That was Connors. He led Passaic County in rushing yards (1,651), touchdowns (21) and was a game-changing linebacker with 117 stops.

Colleges are already after the athletic Clyburn, who has offers from Ole Miss and Rutgers on the table. He led the Ghosts with eight sacks during their run to the North 2, Group 5 final.

Fiore was the tone-setter in the Crusaders' powerful defense. He was the run-stuffer and player who made wide receivers think twice about crossing the middle, finishing second on the team with 87 tackles.

Gould was the other key player in the Crusaders backfield, tying his first-team teammate Bellamy with four picks and two passes broken up. Originally committed to USC, he is now looking for a new college home.

The son of a coach and a model student-athlete, Grasso was a leader for the Maroons, finishing with 113 tackles from his middle spot. He will follow his father’s footsteps to play at Franklin and Marshall.

He didn’t make every tackle, it only seemed that way. Hinspeter ranked among the leaders in North Jersey in tackles with 147 – including 23 in the Non-Public A final against Bergen Catholic – added seven sacks and is committed to Navy.

Larson was a two-way standout for the Rams, who went 9-0 in the regular season for the first time since 1982. He was a three-year starter who helped the Rams to more than 4,000 yards of total offense and also made 38 tackles defensively. He’s committed to Bowdoin (Maine).

Of all these superstar Bergen Catholic players, the one the coaches might talk about the most is Mercer. He fills in every hole. He led the Crusaders with 103 tackles, 6.5 for losses, and made three sacks.

Yes, Mitchell is only a junior. The physically gifted lineman was unblockable at times for the Crusaders, blocking running lanes and forcing the issue on the pass rush. Despite steady double teams, he finished with 40 tackles and two sacks.

The wrestling champ was a force on the defensive line for the Green Knights with 59 tackles, 13 stops for losses and 3½ sacks. He also made an interception against Delbarton and recovered two fumbles.

Price is an incredible athlete who could play on the defensive line or be a rush linebacker. The 6-foot-3, 255-pounder hits you, and you go down. He finished with 99 tackles and 15½ sacks and has committed to Rutgers.

Robinson was a force for the Ironmen his entire career, impossible to move off his spot and quick enough to chase down runners from behind. He finished with eight sacks on the season.

Samuels already is the all-time leader in school history with 22 sacks, and he still has a year to go. He’s likely the top defensive prospect in New Jersey in the Class of 2023, and don’t forget his running touchdown against Don Bosco in the state final.

The man they call “Schmo” was the Green Knights' leader defensively, finishing with a team-high 84 tackles and an amazing 19 tackles for losses. He added four interceptions and has committed to Columbia.

“Big Play Sway.” Swasey made five interceptions to lead the Mustangs and had a season full of big plays, including a 97-yard touchdown catch in the North Group 5 final and a Carrier Dome-record 102-yard return in the Mustangs season opener in New York.

Jim McConville contributed to this report.

Darren Cooper is a high school sports columnist for NorthJersey.com. For full access to live scores, breaking news and analysis from our Varsity Aces team, subscribe today. To get breaking news directly to your inbox, sign up for our newsletter and download our app.