SECOND-HALF OUTBURST SPURS NO. 11 DON BOSCO PREP OVER NO. 13 DELBARTON 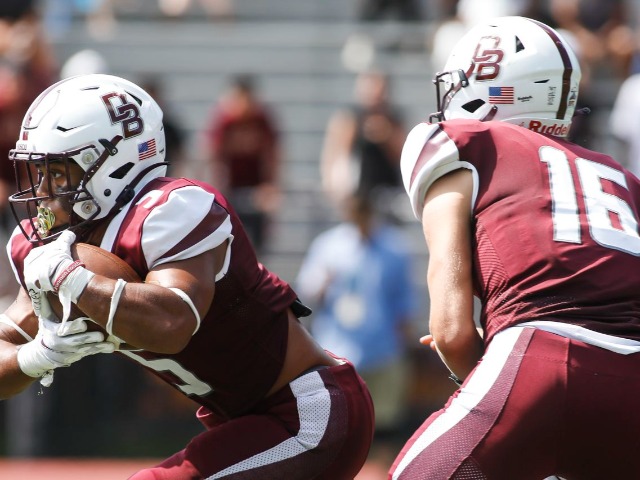 Don Bosco Prep's Ronnie Heath (5) and Nick Minicucci (16), shown in an earlier game this season, propelled the offense in a 31-10 win over Delbarton Saturday afternoon.Scott Faytok | For NJ Advance Media

10/9 - 1:00 PM Football Final
Don Bosco Prep 31
Delbarton 10Complete Box Score »
On a 4th down call late in the first half, Sabella’s screams for a timeout went unnoticed—at least until after the ball was snapped—and the play went on.

What resulted was a scrambling touchdown pass from Nick Minicucci to Omaree Walker that, coupled with a dominant second half, was more than enough for Don Bosco Prep, No. 11 in the NJ.com Top 20, to a 31-10 win over No. 13 Delbarton Saturday afternoon.


Was Sabella thrilled with the outcome? Of course. But he knows better than to think that will happen twice.

“Of course. But you don’t want to make a living on plays like that,” Sabella said. “That was a hell of a play and that’s one where you’re yelling at the ref for that timeout had it not worked out.”

On a day when Don Bosco spoiled Delbarton’s homecoming, not much worked against Bosco’s favor.

The defense continued its stellar season, holding Delbarton to just 3 second-half points and its second lowest game total this year while forcing 4 sacks and an interception.

That performances hasn’t been new, but the confidence level of the other facets of the game—its offense and special teams—have come up to speed as well.

Minicucci and running back Ronnie Heath gave the Delbarton defense fits in the second half with 21 points, 2 of those coming in the final 3 minutes to put the nail in the coffin.

The execution has been better, according to Sabella, but the other major factor has been the belief that has returned to the Ironmen sideline.


Added linebacker Timmy Hinspeter, “We’re finally starting to put things together and it’s like a train—we just keep it rolling and rolling.”

Delbarton looked to be the better team in the opening minutes, scoring on the first drive of the game then letting its defense do work with an ensuing 3-and-out to give them a 7-point lead after the first frame.

A Jack Donnelly field goal in the second quarter put points on the board and, after forcing a 3-and-out of its own, Don Bosco went to work capped off by Minicucci’s throw late in the first half.

That touchdown seemed to spur Don Bosco throughout the break, as it found the end zone on its first drive of the second half thanks to Minicucci’s second touchdown, a 6-yard throw to Kyle Bohm.

Delbarton continued to push but, after electing to go for a 19-yard field goal to bring it to a 1-possession game in the 4th quarter, Don Bosco pounced.

Don Bosco marched all the way down the field, converting on a pair of 3rd and long situations, and put the game away on Ronnie Heath’s 1-yard scoring run with 2 minutes left.


Freshman back Nolan James added the cherry on top with his first varsity touchdown to push the score to its final iteration.

“They made it interesting,” Sabella said. “They got it to 17-10, we had a couple 3rd and longs with Nick making some big throws to make those conversions. That put us in good shape.

“The last 2 games has really made a lot of strides. He’s practicing better as well and, if he keeps playing better, we’ll be a pretty tough team.

Note to readers: if you purchase something through one of our affiliate links we may earn a commission.
BACK