NO. 6 DON BOSCO PREP TRANSFORMS PATIENCE TO POWER IN UPSET OVER NO. 4 RIDGEWOOD 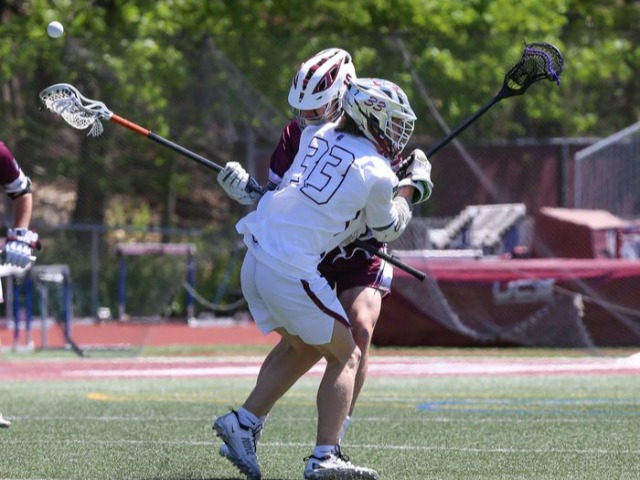 Don Bosco Prep entered this contest with a scoring average that suggested a license to shoot at will, yet established an early tempo that indicated more of a mandate to shoot only if you definitely will.

“Our guys are fast-twitch guys and they want to go to the cage. But we wanted to control the offense and identify where the matchups were going to be. Then we could attack,” Don Bosco Prep head coach Brendan Gorman said.

That the sixth-ranked Ironmen did, connecting on four straight goals in a 3:12 span of the second quarter and controlling both sides of the field over the final three periods to orchestrate a 15-4 upset over No. 4 Ridgewood in an NJILL-Gibbs Division clash Saturday afternoon at Granatell Stadium in Ramsey.

The measured pace with which Don Bosco began the game was like an ominous storm cloud just waiting to bust. But wait it did, attempting only three shots in the first 4:30 of play, yet sinking two of them on attempts from Thomas and Stuart.

“Being patient just opens up a whole new aspect of the game, and I don’t think a lot of people even realize that,” Stuart said. “But we can be patient because we know what we can do. Our three attackmen and all of our six middies have spot-on shots and know how and when to shoot the ball.”

That was made pretty apparent in the first four games as the Ironmen averaged 13.2 goals, 14.6 over the last three against No. 17 Bridgewater-Raritan, Ramapo and No. 14 Bergen Catholic.


But this was a Ridgewood club that had allowed only 16 total goals in its first three outings, and also has built a stout offensive reputation of its own (13.1 gpg.) that should have but did not intimidate Don Bosco Prep’s defense.

“They have a solid team. We were just quicker to be on their hands. They couldn’t keep up with our pressure,” junior defenseman Connor Gerlach said. “The idea was just to pressure, pressure them all day; stay on their hands and eat them up.”

It looked at first as though Don Bosco’s relatively cautious approach might backfire, when Dunphey scored back-to-back goals off roll dodges against the shortstick late in the first quarter to knot the score at 2-2. The Ironmen then had a goal negated for a crease violation 35 seconds into the second quarter, and watched as seemed to Ridgewood gradually gain momentum.

But then the floodgates suddenly opened, starting with an unsettled goal by junior attackman Mason Carfello off a midfield steal and feed from Marquis for a 3-2 Don Bosco lead with 7:28 to go in the half. That was the eighth of 11 turnovers that half for Ridgewood, which paid handsomely several times for its miscues and converted only rarely on its own forced turnovers.

Stuart connected off a pass from Thomas with 5:16 to go, and junior attackman Connor Gorman scored in transition just 18 seconds later off a turnover ground ball by senior middie Liam Sayre and a feed from junior Michael Amoruso. Marquis connected 42 seconds after that off a pass by Carfello (who finished with four assists) to put Don Bosco in front, 6-2, with 4:16 remaining.


“Every team we’ve played this year has come out with a different defense. We didn’t now what Ridgewood was going to do. And then early in the game we started picking where we thought we could attack,” Brendan Gorman said.

At the other end of the field, Ridgewood was discovering the areas it was unable to attack. Don Bosco’s poles were physical, fast and quite defiant whenever the ball moved anywhere near the crease. Senior Kai Dimaculangan finished with six saves in the victory while junior Colin LaForty had 10 for Ridgewood.

“We showed patience on both sides of the ball. We were patient in our last game, too,” Gerlach said of that 12-3 win against Bergen Catholic. That was quite an improvement following an 18-9 victory against Ramapo.

“Against Ramapo we weren’t as patient,” he said. “But once we were able to calm down and play team defense, we were lights out because we knew where the slides were and we know how to have each other’s back all game.”

And should Connor Kehm, Damien Blando, Amoruso or any of Gerlach’s other defensive mates momentarily lose sight of a teammates back, there is always that explosive offense to rely upon.

“They just work so well together. They’re just like brothers,” Gerlach said of the offense. “They know each other’s game and they know where everybody is going to be throughout the game.”

For a good stretch of the fourth quarter, the general vicinity of goal was where the Ironmen’s offensive guys were going.


Messineo cut the deficit to 9-4 for Ridgewood when he scored unassisted 3:30 into the final period, but Stuart responded less than a minute later off a pass from Thomas. Sophomore middie Robert Simone then won the ensuing faceoff, carried it through the box and dunked at the goal for an 11-4 lead with 7:23 to go.

“These guys know how to test the defense and see what’s given to them without forcing it,” Brendan Gorman said. “I think you’re going to see a lot more of that. You’re going to see patience early and then we’re going to find our moments where we can go on runs.”
BACK