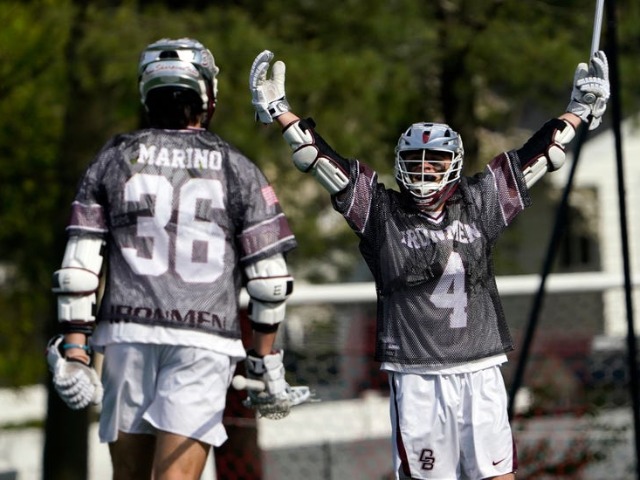 ORADELL – Don Bosco made the fiercest rivalry in the state look like a stroll in the park.

Mason Carfello scored a hat trick and the top-ranked Ironmen tamed No. 3 Bergen Catholic, 12-3, on Tuesday at Jack McGovern Field.

It's the first time in the history of the rivalry that the Ironmen won by at least nine goals. It's the start of what Don Bosco hopes is the greatest season in school history.

"We're only four games in right now, but we're definitely feeling good," Johns Hopkins-bound Koleton Marquis said. "I think this is the year that we take it home and prove to everyone what Don Bosco Prep is all about."

What Don Bosco showed on Tuesday was a well-oiled machine on offense and precise rotations on defense. Goalie Kai Dimaculangan stopped 11 of 14 shots and defender Connor Kehm held Bergen Catholic star Brenden Kelly without a goal.


The Ironman offense broke open the game by scoring eight of the first nine goals, starting with a nifty wraparound by Marquis. Coach Brendan Gorman chalked up his team's instant chemistry to having 12 or 13 players on the same box lacrosse team.

"I just love the fact that these boys have an opportunity to play," Gorman said. "To see these guys smile and love every moment, it's a blessing."

Don Bosco's Mason Carfello, left, winds up before scoring on Bergen Catholic's goal in the first half of a match on Tuesday, April 27, 2021, in Oradell.
What it means
Thus far, Don Bosco (4-0) has lived up to the billing as the preseason No. 1 team. The Ironmen have dismantled three of their six Gibbs opponents, including Northern Highlands on Opening Day and Ramapo last weekend.

The big test will come on Saturday when Don Bosco hosts rival Ridgewood in a No. 1 vs. No. 2 showdown.

"I told them in the pregame, this could go down as the best Bosco team in history," Gorman said. "We've been living by that. We thrive on not having an opportunity last year. It's a creator's game and it's a gift."

Don Bosco now holds a 21-18 series lead in the battle with Bergen Catholic. Until last season, the two schools had met every year since the Crusaders' inception in 1995.

Four of the last five meetings have gone to the Ironmen, including an epic state tournament match two years ago.

Don Bosco's Max Thomas, left, and Koleton Marquis, right, celebrate Marquis' goal early in the game against Bergen Catholic on Tuesday, April 27, 2021, in Oradell.
Instant connection
A Don Bosco team with 11 Division I commits got even deeper with the addition of Carfello.

The Pequannock transfer is one of the top returning scorers in the state after supplying 39 goals as a freshman.

Carfello closed out the first quarter with a pair of goals, including one off a turnover, to cap a 6-1 Don Bosco run. The junior attacker struck again about a minute into the second by ripping a shot on the man-up.


"He's such a great righty to play with," Marquis said. "I never really had a righty. It's great to have someone on the same track and on the same page. We're going to do something special this year."

"My first time playing with (Marquis) was in box," Carfello said. "Right away we knew this is going to be it. We say every gameday, duo of the state."

Get the Inside the NFC East newsletter in your inbox.
All the news and analysis about the Giants, Eagles, Cowboys, & Washington.

Up next
?Don Bosco returns home to face Ridgewood on Saturday afternoon.

?Bergen Catholic looks to regroup on Saturday when it hosts Christian Brothers Academy.

Sean Farrell is a high school sports reporter for NorthJersey.com. For full access to live scores, breaking news and analysis from our Varsity Aces team, subscribe today. To get breaking news directly to your inbox, sign up for our newsletter and download our app.