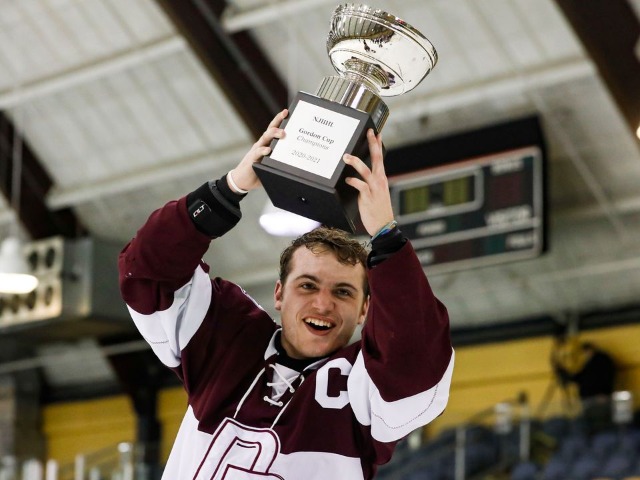 There’s simply something magical when it comes to the Sedlak family and Don Bosco Prep ice hockey.

The elder Sedlak, Tyler, led Don Bosco to its first ever state title as a senior in the 2018-19 season, scoring the final goal and earning NJ.com Player of the Year honors for that season.

The younger Sedlak, Connor, simply did what his older brother did his senior year—lead Don Bosco Prep to a championship, scoring the final goal of the season in the process, and earning NJ.com Player of the Year honors for the 2021 season.

Connor was also named the Gordon Conference regular season MVP, scoring 18 goals and assisting on 10 more while leading Don Bosco to the Gordon Cup and a No. 1 team ranking en route to Team of the Year honors.

Six years a Sedlak has donned the Maroon and White of Don Bosco. Between the two brothers, the family has left more than just a mark on the historic program.

“Clearly the consummate professionalism of both Connor and Tyler helps us get to where we are,” Don Bosco coach Greg Toskos said.

Another similarity between the brothers on the ice? Motivation from past failures. In their respective junior seasons, Don Bosco fell short of a state title by one game.

That was more than enough fuel for the siblings to end their scholastic career as champions—Tyler a Gordon and state champion, Connor a Gordon champion with the pandemic stripping away the state tournament this year.

Even in a shortened season, Connor and the rest of the Ironmen knew exactly what needed to be done.


“I remember getting that text from Toskos,” Sedlak said about the 2021 season being played, “and the first question by another captain was ‘is there a chance to win a ring?’ All the returning guys had the feeling of losing in the state championship...knowing what both sides of the road are like.”

The other motivating factor? The relationship that the brothers have forged both on and off the ice.

Tyler, currently in Massachusetts playing for the Islanders Hockey Club of the National Collegiate Development Conference, drove back to New Jersey to see his Connor both on senior night and for the Gordon Cup final against Gloucester Catholic.

“You always hear about the older brothers and what they do,” Connor said. “My brother and I have a great relationship. It’s been a privilege to play with my brother and it shows the kind of relationship we have that he drove from Massachusetts to watch the game.”

Added Toskos, “I think Tyler was in Connor’s ear in a positive way. It takes someone like Tyler Sedlak to come in and talk to the boys about how it’s only two years out but how he would give anything to play in a Bosco uniform again. These guys get it, they understand it. You’re always looking for the next thing but, once you’re out, you don’t realize that playing high school hockey is the most fun you’ll ever have.”


Even with the motivation to make the family proud, Connor said that it was difficult to prepare for a season unlike any other.

Don Bosco Prep, as well as the entire state, had its fair share of turbulence in the pandemic-shortened season. It’s season-opening game against Bergen Catholic was canceled an hour before the scheduled puck drop with the Ironmen suffering their own shutdown two weeks later.

If anything, that only motivated Connor and the rest of the program. It taught them to fight as if every game was their last because, in this year, it very well may have.

Yet just as Don Bosco has done throughout the year, it persevered.

And leaned on a Sedlak to win a ring.

“Don’t take anything for granted,” Connor said about playing this season. “There were times during the season you don’t know when the last game is. So you have to go out like it will be your last.

“That was the motivation every game. To be the best we could be and be prepared for whatever came after that.”